Bishwas played an instrumental role in designing and building many of the apparatus that Sri Chinmoy used for his weightlifting feats.

Guru periodically performed weightlifting exhibitions in which he would perform one enormous and creative lifting feat after another. He announced in the fall of 2004 that he would like to have another such exhibition. He wanted ideas for new lifting machines. That was when we built his “shrugging” machine and one or two other new ones like the leg press machine.

I had the idea that Guru could lift his own cute little blue smart car, but from overhead rather than from underneath. I told Guru that this was definitely a more difficult way of lifting the car, but that as long as the car wasn’t over 2,000 pounds, I thought he would be able to lift it. Guru liked the idea, and immediately called Prataya to ask what the weight was because she had bought the car for him. It turned out that the weight was 1,971 pounds.

So Guru asked us to start building a machine to lift the car right away. But he also kept asking, “Will I be able to lift it?” 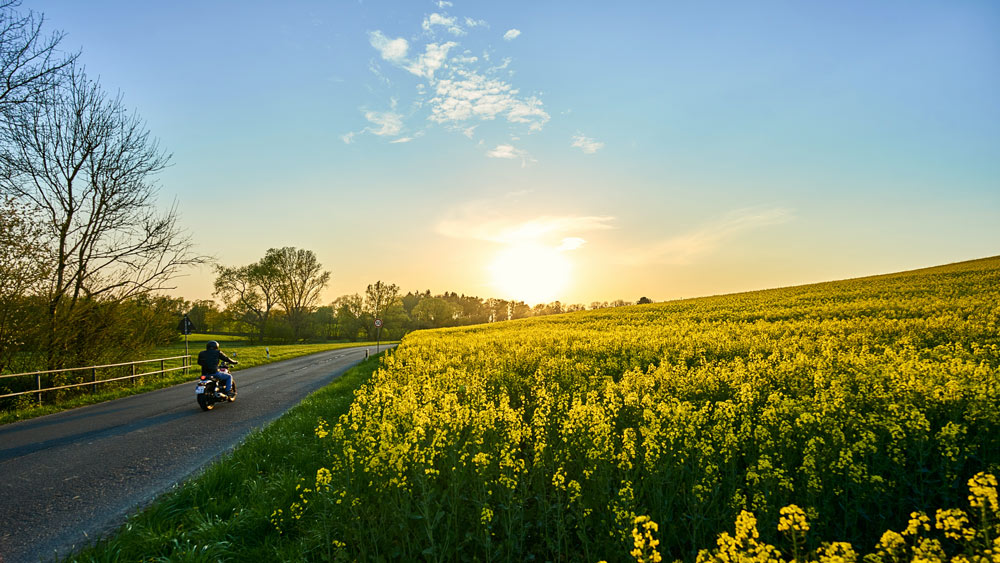 When I was 19 years old and still in college, I had to go home from school for the summer. I had recently joined Guru’s path and had been a disciple for only a month. I still didn't understand Guru that much and had a little bit of fear about the whole “being a disciple” thing, but as this story will show, I was also receptive to Guru’s influence and protection.

My means of transportation was my motorcycle, and I had to ride it home about 100 kilometers on the highway. As I got on the motorcycle, I felt a very powerful thought—you could say an inner voice—run through me. It wouldn't leave my mind, and it gave me two directives. The first was, “Check your front tire. Before you ride your motorcycle, check the front tire of your motorcycle.” And the second was, “Chant ‘Supreme’ all the way home.” (Sri Chinmoy’s preferred term for God was “Supreme.”)

I had not yet met Guru in person, and I didn't know where this thought was coming from. But it was extremely powerful and it wouldn’t leave me. So I checked the bike—I checked the tires, I checked everything. And I rode home very carefully at a minimum speed, chanting, “Supreme, Supreme, Supreme, Supreme” the whole way. I thought I was going crazy, but I felt compelled to do these things.

We were told Mother Teresa was staying at a church in Rome, very close to the Coliseum. It was near a church but it was a convent. It was so simple. There was no running water or heat, and the nuns lived with such simplicity. Guru was so excited and so delighted.

When Guru got there, Kailash was driving, and I got to be in the car with Guru. There were about 50 disciples who were already there waiting. They wanted us all to gather at the back entrance of the convent. It was quite beautiful. There were beautiful trees and a view of Rome.

Seeing the God inside my son

When I started to meditate under the guidance of Sri Chinmoy, the situation in the family wasn't so good because of the doubts of my spouse and my parents. I could not even talk about meditation. But I had a little corner in the basement where I could be by myself. It was in my office behind the door. I had set up a little altar, a very minimal altar, and I would meditate in the morning. I would try to wake up at least 20 minutes before François, my son, because when he was up, it was another world, since he was hyperactive.

Both children attended the local school. François was in grade 4, Julie in grade 2. At school, François always wanted to joke around and have fun. He would do things that distracted the teacher or made him/her upset. Julie, two years younger, was an example of conformity. François was the opposite! He was a little bit hyper, and this created challenges.

So I had started meditating to help me accept my son and not get too upset with everyday events, either at home or at school. Before the children woke up in the morning, I would go to my secluded area for about half an hour of relaxation, deep breathing, building up my tolerance level…

The Potter and the Clay

I was blessed to have quite a bit of private time with Guru on various occasions. One time I approached him having allowed myself to be immersed by a sense of failure. I told him that I was feeling failure all around me.

Another example Guru used was the farmer who works in the field. He spreads fertilizer, and you cannot say that that is very beautiful. But eventually the farmer grows a bumper crop of food. So it was not that I was a failure, Guru explained to me―it was simply that I was not finished yet. I was witnessing myself in the process of being perfected.

Every second with your Master on earth is precious

The Masters speak of the inevitable dry spells along the journey to our self-realization. I experienced one after twelve years on Sri Chinmoy’s path, when I felt flat for a number of weeks. I thought to myself, “I have not made any spiritual progress,” and one day I simply knew I had to go to New York to be with Guru.

I arrived very late, and in my morning meditation the next day, I felt no enthusiasm to be seeing Guru soon. I went to Aspiration-Ground (the tennis court where we met) despite this, where there were only a few dozen disciples waiting for Guru’s arrival. Suddenly, I felt a strong inner push to get my camera from my accommodations―just a small, ordinary camera. I ran as fast as I could so that I could return quickly, saying to myself, “Every second with your Master on earth is precious.” (How quickly things had already changed for me inwardly!) 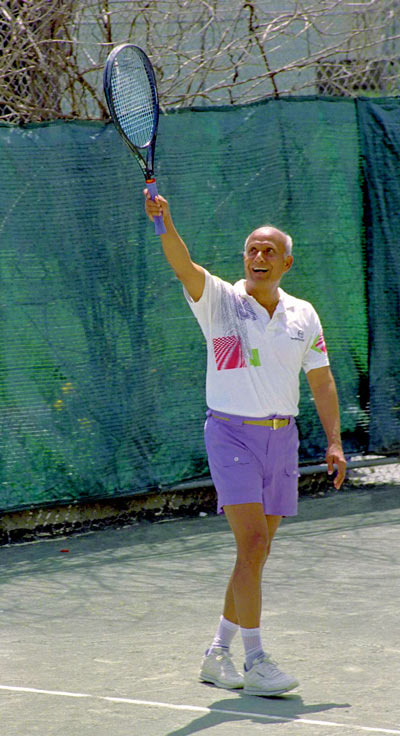 I made it back before Guru arrived, and when he did, he called for a photographer. This day was one of his tennis anniversaries, celebrating his accomplishments in playing the game.

I looked around and none of the usual photographers seemed to be there, so I went and stood on the far side of the net. He would play a set with one of his tennis court assistants; they would then come to the net, Guru would place his tennis racket on the person’s head in blessing, and I would come close and snap a picture of the moment. Guru had asked for a photographer knowing that for each player, the blessing-photo would be a treasured memento. Somehow I got the inner message to run for my camera even though I was in the depths of a spiritual dry spell!

Sometimes it takes a crisis to make us see

I am inspired to share one story that happened in the last two years, after Sri Chinmoy departed this world, as a way to illustrate that he continues to watch over us all from the higher planes, though we may not always be aware of it.

One day I was driving back from an appointment on Long Island when I hit some traffic on the Grand Central Parkway and decided to get off and take the back roads through Jamaica Estates.  I was driving at a moderate speed up a slight hill in this residential neighbourhood.

It was a small two-way street with cars parked on both sides of the street, which in reality left room for only one car to drive at a time – a very common situation in this area of Queens. As I approached the top of the hill, I saw that a car was speeding up the other side of the hill, not seeing me – it must have been going at least 40 or 50 miles per hour, with its engine roaring.  I jammed on my brakes, but there was no room for me to pull over, as there were parked cars on either side of the road next to me.  I shouted Supreme (invoking God as Sri Chinmoy urged us to do when in danger) and prayed in that split second before what seemed an inevitable crash and very possibly the end of my life!

The white bird and the lake

In my early years of exploring meditation and the little-known subject of reincarnation, I came across a rather discouraging description of the long passage of time the soul supposedly takes from its very earliest entry into the earth arena until its full blossoming in God-realisation. Imagine, said the words of an old Indian text, a beautiful white bird flying to a large lake once every several thousand years and taking away a single drop of water in its beak. The length of time it takes for the bird to empty the lake is a description – metaphorical of course – of how long it takes for this journey to be concluded, for realisation or self-blossoming to be won. 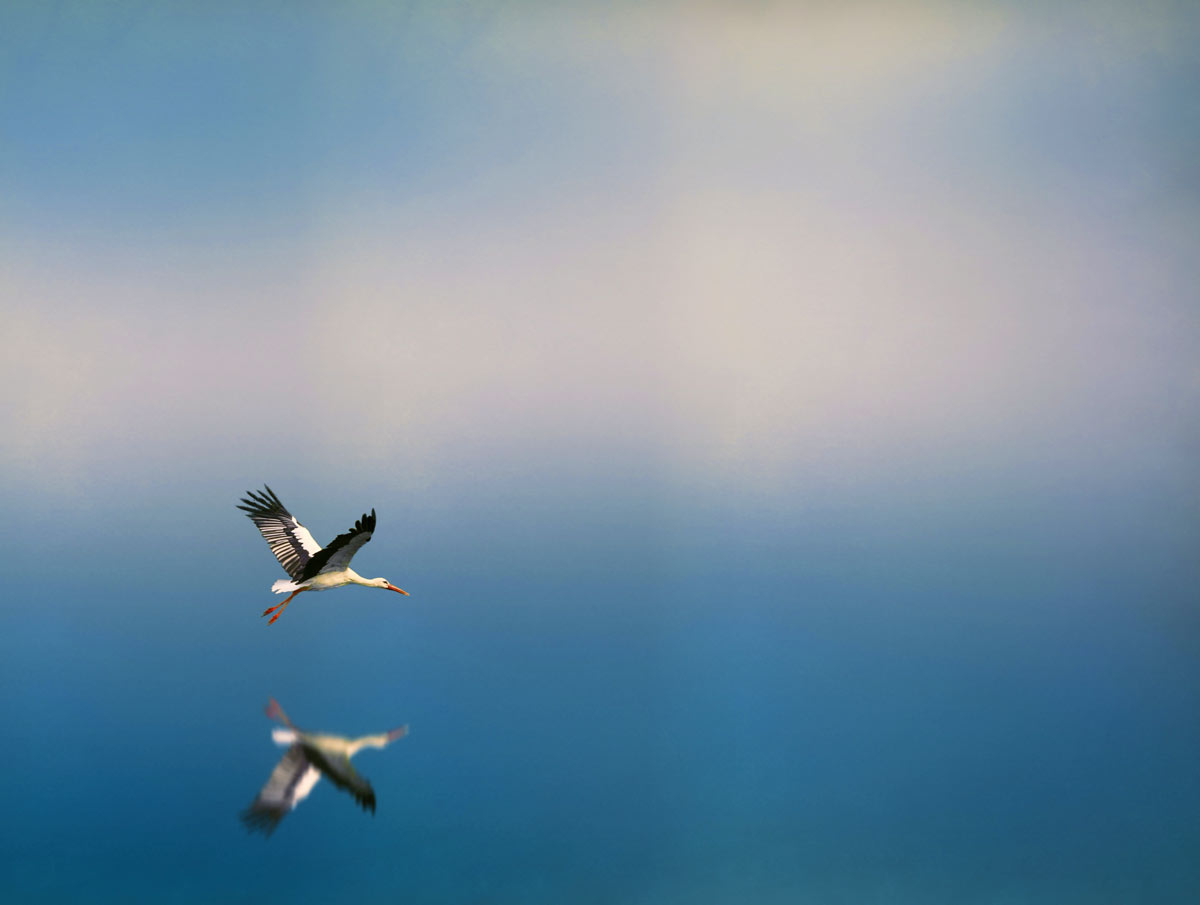 A rather bleak thought! But encouragingly, it did add the further comment that for those who have a curiosity or an awakening interest in spirituality, the lake is almost empty and the long journey of the soul is not in front of us but already behind us.

One weekend in New York I was invited to a disciple’s birthday party, celebrated in Guru’s customary way—disciples sitting on Guru’s living room floor as paper plates of curry and birthday cake were passed around. It was a typical time for chitchat with Guru. “So, Marion,” Guru said, catching me by surprise (Guru so rarely spoke to me), “when will you open your restaurant?”

I nearly choked on my curry. “Wha - wha - what restaurant, Guru?”
“First choice restaurant, second choice health food store.”
“But I don’t have any money, Guru!”
“Your parents will give you,” Guru reassured me. “Can you have it open by April 13th?”

But that gave me only six weeks to convince my parents, find a location, buy the equipment, and set it up. And I had never even run a cash register, let alone a business!

When Guru asked us to do something, he would put an incredible force on it. It was as though a divine wind was blowing inexorably towards a particular goal, and all I had to do was to spread my sails to catch the wind. In one way it did feel like an enormous amount of hard work, but in another way, it felt effortless, as though everything was already done.

The love is always there, boundless

It was during Celebrations. I don’t remember how old I was, maybe in my early twenties. I remember being very insecure and feeling that Guru outwardly didn’t give me enough attention and felt a little bit like Guru loved other people more than me because he didn’t talk to me. I felt insecure and down and a little bit unloved or not loved enough. Guru loves everyone else more than me, that is how I felt. I remember it went on for quite a few days. My mind was very strong. I was really down for a few days. One day out of the blue, Guru calls me up and without really saying anything gives me a little gift bag. And we have a photo of it. It’s a blue gift bag, that’s right. In the gift bag was a little stuffed animal or something. But the most precious thing was that Guru wrote on the gift bag, it’s very faint, He wrote, “My dearest Aruna,” and then is the printed “I love you,” and then underneath Guru writes, “Guru.”