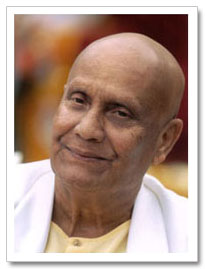 Sri Chinmoy dedicated over 40 years of his life to promoting the growth and development of global peace through numerous creative and inspirational initiatives. His myriad, diverse endeavours earned him worldwide respect as an eminent peace emissary which has resulted in numerous international peace awards, as well as nominations for the Nobel Peace Prize.

A deeply compassionate humanitarian, Sri Chinmoy believed that real and lasting peace can be established on earth through the inspiration and transformation of the human heart. As a result of this belief, Sri Chinmoy undertook all of his multifarious activities with the sole purpose of bringing forward the heart’s nobler sentiments of universal love, compassion and oneness; nurturing the hope that each and every individual will participate in the world peace-making process. All of Sri Chinmoy’s peace initiatives are non-political and are offered free of charge in a spirit of service to humanity.

Since 1969, Sri Chinmoy has initiated and undertaken numerous cultural and sporting events throughout Canada that have offered its citizens opportunities to cultivate inner peace through self-awareness, self-transcendence and a growing sense of the world as a one family.

Peace Concerts
Sri Chinmoy has composed over 22,000 inspirational songs that invoke a feeling of peace. He has performed his compositions at more than 700 Peace Concerts in distinguished venues worldwide, always free of charge. In Canada, Sri Chinmoy’s Peace Concerts have been attended by thousands of people. For example, his concert at the Molson Centre in Montreal in the year 2000 drew an audience of over 19,000. Sri Chinmoy has also performed at Montreal’s Palais des Congrès, the Metro Toronto Convention Centre, Canada Place in Vancouver, Ottawa’s Corel Centre and in Centre Block and West Block on Parliament Hill.

Lectures and Books
In over 1,500 books of poetry, essays, plays and short stories, Sri Chinmoy’s words have conveyed the richness and diversity of the quest for peace and self-understanding. His books are available in community and university libraries, as well as bookstores across Canada, and have served as textbooks for studies at McGill and the University of Ottawa. Since 1969, Sri Chinmoy has also offered numerous lectures on inner peace at colleges and universities across Canada.

Art Exhibits
Sri Chinmoy completed his first painting while on a visit to Ottawa in 1974.  He has painted and drawn literally millions of inspirational works of art, including 15 million drawings of birds, universal symbols of humanity’s dream for peace and freedom. Many of his works have been displayed in galleries worldwide. In 1993 and 1994, exhibits of his Dream-Freedom Peace-Bird drawings were held at 18 York Street in Ottawa.

Peace Run
Since its inauguration in 1987, the biennial Sri Chinmoy Oneness-Home Peace Run has brought the message of peace through the medium of sport. Over three and a half million people in more than 120 countries have participated in this international torch relay. On every continent, the Peace Run has bridged barriers and helped to foster oneness among people of all cultures and beliefs. In Canada, each Peace Run has met with outstanding success with both prominent Canadians and common citizens alike, as they joined in passing the torch from hand-to-hand across the country. In 2005, this torch relay will take on the new title of World Harmony Run, reflecting more fully Sri Chinmoy’s lofty vision of a global oneness-family.

Sri Chinmoy Marathon Team
The Canadian branch of the international Sri Chinmoy Marathon Team, founded and directed by Sri Chinmoy, was inducted into the Canadian Road-Running Hall of Fame in 1993 for its “tremendous contributions to the sport of road-running in Canada”. All of the running events sponsored by the SCMT—from the annual Sri Chinmoy Triathlon in Victoria, BC, Canada’s first and oldest triathlon, and the annual Sri Chinmoy 24-Hour Race in Ottawa, to the weekly two-mile Self Transcendence Races—are held without corporate sponsorship and feature optimum conditions for the encouragement of physical fitness and the promotion of personal growth through athletic accomplishment. In 1979, Governor General Ed Schreyer ran in the first SCMT marathon held in Ottawa which was dedicated to the Year of the Child.

Oneness-Heart-Tears and Smiles Humanitarian Service Program
Since 1990, Sri Chinmoy and his students in Canada and worldwide have provided medicine and equipment, food, water, clothing and other humanitarian assistance to over 130 countries. Responding to special requests from United Nations Under-Secretaries-General, Sri Chinmoy’s Oneness-Heart-Tears and Smiles project has been a pioneer in serving the needs of starving and destitute people throughout the world. In addition to this international humanitarian outreach, Sri Chinmoy has launched a program for his students in Canada and other countries to serve the homeless within their own communities.

Canadian Honours and Awards Presented to Sri Chinmoy
In recognition of his lifetime of service for global peace, Sri Chinmoy has received numerous honours and awards, including national awards from many countries.  Awards and honorary degrees have been bestowed by universities around the world for both his efforts to promote world peace and his creative outpouring of inspirational music, art and literature.

Tributes to Sri Chinmoy from Canadian Dignitaries
Sri Chinmoy has received hundreds of written tributes from well-known Canadians that reflect the profoundly inspiring effects of his many-faceted endeavours. These tributes also serve to demonstrate the significant difference that he has made in the lives of countless Canadians with his message of peace, harmony, self-transcendence and service to others.

Songs Dedicated to Canada
Over the years, Sri Chinmoy has composed 15 songs that express his love and admiration for Canada and for the role our country plays in the pursuit of worldwide peace.  Below are two such examples:

Canada, Canada to you I bow and bow.
In the inmost recesses of your flower-pure heart
I discover my Canadian sisters and brothers.
Supremely vast is your body's existence-life.
In your vision-eye and on your determination-face
Wild unrest fails to breathe.
I lose myself, my very existence
Inside the great unknown:
Your Immortality's Nectar-Song.

I thank you, Canada

I thank you, Canada, I  thank,
Because you have shown me your compassion bank.
You are your body’s spacious length.
You are your heart’s precious strength.
Your are your soul’s oneness-light.
In you I have my trust-delight.